Founder of the Montfort Brothers 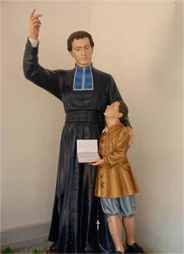 St. Louis-Marie Grignion de Montfort was born on January 31, 1673, at Montfort sur Meu in Brittany, France. He was the eldest of a family of eighteen children, half of whom died in their infancy. His father, Jean-Baptiste Grignion, though a nobleman and a practicing lawyer, was in straitened circumstances.

In 1685, when he was twelve, he was admitted to St. Thomas College at Rennes, an Institution run by the Jesuits. Eight years later, namely,1963, at the age of twenty, he went to Paris intending to join the Seminary of St.Sulpice,to prepare for priesthood. Being unable, through poverty, to gain admittance to St.Sulpice, he joined a Seminary for poor Clerics run by Fr.De la Barmodiere. At confirmation he took the name of Marie, to affirm his lifelong devotion to the Blessed Virgin. One year later, Fr.de la Barmodiere died, and Louis-Marie joined the “Little Community of Poor Students”. Here owing to the unhygienic conditions of living, coupled with the unwholesome food, Louis-Marie fell dangerously ill, but was able to recover. After that, he was able, with assistance, to enter St.Sulpice, and completed his religious course.

He was ordained in 1700, and was sent to Nantes as a rural preacher. Later, he was sent to Poitiers where he was appointed Chaplain of a hospital for the poor. It was here that he started his first religious congregation, namely, the Daughters of Wisdom, a congregation for women.

During this time, he began giving missions to the poor. Unfortunately, owing to his manner of work, he created many enemies even among the Clergy. They saw that he completely identified himself with the poor, and mingled freely among those who were regarded as sinners. They also saw how the poor flooded him with their love.

His methods were also unconventional. On one occasion, he invited his listeners to bring their irreligious books to be burnt on a pyre. Unfortunately, someone from the audience surmounted the pyre with the effigy of the devil represented by a society woman. This incident was skillfully used by these enemies to persuade the Bishop of Poitiers to forbid Louis-Marie from preaching in his diocese.

Not knowing what to do next, he even thought of leaving France and working in a foreign Mission such as Canada. In this state of mind he went to Rome on foot, begging his way, to seek the advice of the Pope (Clement XI) on what he should do. The Pope received him on June 6, 1706 and asked him to continue working in France in submission to the Bishops. The Pope also conferred on him the title of ‘Apostolic Missionary’.

He went to his native Brittany where he embarked on a course of missions which he continued almost uninterruptedly until his death at St. Laurent-sur-Service April 28, 1716, at the early age of 43.

He is the founder of: