CAMPION - THE BEGINING AND THE GROWTH 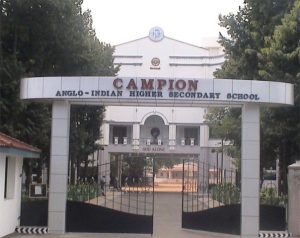 mpion higher secondary school, Tiruchirapalli,was founded in the year 1934. is the successor school to st.joseph’s European middle school, which was located at anothersite (on convent road) in Tiruchirapalli.

The school owes its existence to the philanthropy of a great priest, Mgr.joseph de rozario, an Anglo-Indian, who was once a district session judge. It was originally indented primarily for Anglo-Indians, but in the course of years members of other communities have been admitted.

The first headmaster was fr.v.g.lambert, a Jesuit. He was ably assisted by a team of priests and lay teachers.

The school started from very humble beginnings, had originally only a small two-storeyed bunglow, supplemented later by thatched hups, located on a four-acre plot of land. Its initial strength was 109 students, the majority of whom were day-scholars. The rest were paying borders and orphans.

In 1940, the area of the school compound was substantially increased by the purchase of a tree and a half acre piece of land adjacent to the school. Shortly afterwards, namely, in 1943, the first major building was constructed. This was followed, in 1957, by another building, constructed on the pattern of the existing building.

Meanwhile, the school continued to growth in popularity and strength. In 1962, the inspector of anglo-indian schools had the following report on Campion.

“The pupils are receiving excellent training on all possible lines. The intuition deserves all praise for its work and service.”

In academic studies, the school secured 100% passes in the high school examination for several years, while, in sports, champion rose to be the top most school in the entry district of Tiruchirapalli.

To mark the 25th Anniversary of its foundation, the school constructed, in 1960, a beautiful chapel, dedicated to “Regina Mundi” the “Qeen of the World”.

In 1970, the school had the unique honour of celebrating the canonization, on October 25, 1970, of Edmund Campion, the patron of the school.

At the close of the year 1972, the Jesuits handed over the management of the school to the owners, the Diocese of Tiruchirapalli.

One important development was the upgrading of the school to the Higher Secondary level. For this purpose, a new building on the pattern of the existing two buildings, was constructed. The Higher Secondary section started functioning from June 1979.

To mark the 50th Anniversary of its foundation the school constructed, in 1984, a beautiful building connecting two of the existing buildings, Shortly afterwards, in 1990-91, a new building, dedicated to St.Montfort, founder of the Montfort Brothers of St.Gabriel, was constructed to house the primary section. It was followed by the construction of “Mariagam’, a residence for the Brothers, in 1992-93.The original, small two storeyed bungalow, which had become unsafe, was then demolished. A swimming pool and two concrete basketball courts were added to the infrastructure of the school as Diamond Jubilee Memorials in  1994-95.

The school has reached great heights in every sphere of its activities. In academic studies, the results of the Higher secondary and High school Examination have been mostly flattering. In sports and games, campion students now rank with the best in tamilnadu. In other co-curricular activities, campion students have acquitted themselves creditably.the school is now regarded asw one of the finest in the whole of India.As an indication of its popularity,the strength of the school which stood at 1020 in 1973,when the Jesuits left,is now(april 2003) 2883.

Today after 70 years, with Rev.Bro.Arul as the mainspring     of all its activities, Campion continues to strive towards greater heights. If the destiny of India is shaped in its classrooms, Campion can legitimatelyclaim its contribution to this sacred duty.

With the completion of Sixty-nine years of its existence, Campion now stands poised for its onward march. It looks back, with satisfaction and pride, at its remarkable achievements. It cannot forget what it owes to its great men and women of the past who, with tireless energy, had dedicated their lives to achieve ideals of Campion. It also remembers those who are with us today, working silently, steadfastly and with devotion, in the service of the school. With thoughts such as these to inspire and placing its trust in God, Campion can look forward to the future with hope and confidence.